How Do You Treat a Sick Orchid?

tbo
Apr 15, 2020 Orchid Delivery Comments Off on How Do You Treat a Sick Orchid? 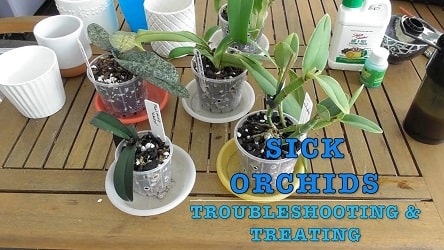 Mastery in taking care of Orchid often takes time. There are times that you are too careful of your orchid that sometimes something suddenly happens and next thing you know, your orchid is sick and just died. An efficient way to prevent the orchids from getting sick or dying is to know the problem early on. Often, people who grow orchids use the leaves to check on the orchid’s health. If brown or black spots start to show on the leaves and if the leaves turn yellow, then that is a sign that the orchid is not healthy anymore.

Black and Brown spots might indicate that the plant is sunburned. To prevent this, move the orchids and place them in a spot where there is no direct sunlight. In some cases, black and brown spots might be because of bacterial infection. To treat this, just cut off the affected area. Another factor that affects Orchids is the water that is used. Salt minerals in water can kill the orchids.

It is natural for orchids to grow old, sometimes when the leaves turn yellow that only means that the leaves are old. This occurrence should not be a thing to worry about since new ones replace old leaves after they wither. Too much exposure in direct sunlight might also be a factor, just put the orchid in a place with indirect sunlight.

How to Treat a sick Orchid?

From Black spots and Yellow Leaves

Bugs that commonly affect orchids are Mealybugs and Scale. These bugs can easily spread through the entire leaves. If these bugs start to show, it is important to remove the affected orchid from the rest to prevent from spreading the virus.

To treat bugs, separate the affected orchid from the rest of the orchids. Secondly, using a horticulture oil, spray it into the plants. Lastly, using an old toothbrush, dip it in rubbing alcohol and dab it on the affected area. After the bugs are treated, they will soon dry up and will turn into a flake. Bugs are a big pain for orchid growers, be sure to treat it as soon as you see them.

When the winter season approaches, orchids grown outdoors are prone to be damaged. Freezing temperature can affect the leaves and the affected area tend to fall and become thin due to the ice or frost crystals puncturing the leaves. To avoid this scenario from happening, it is best to regularly check the weather forecast and in case the temperature outdoors is cold, bring the orchids inside to protect it from the cold.

Burn due to Fertilizer

Too much fertilizer can also be another factor for orchids to get sick. Excess fertilizers build upon the orchids potting mix, which will result in the tips of the orchid leaves turning into brown color instead of green. If this happens, repot the orchid and water it regularly to prevent a buildup of excess fertilizer. Normally, orchids are fertilized weekly.

Overexposure to sunlight tends to overheat the orchids. As this happens, part of the leaves starts to spot black and/or brown marks and will eventually die. The best remedy for this is to move the orchid somewhere where it is not directly exposed to sunlight. It is also important to be mindful of your orchids during the summer season since the sunlight is very hot at that time. As to the light and temperature, set the orchids in a place where there is no direct sunlight. The room temperature should be around 70 degrees Fahrenheit and 50 degrees Fahrenheit at night.

Orchids grow best when they are watered weekly. Avoid under watering as this may result in the orchids losing their leaves and kill the orchid.

Same as underwatering, overwatering can also be damaging to your orchid. Overwatering can cause to roots to rot. However, if the orchids are overwatered, you can still save it. Just cut off the mushy roots, remove them, and repot the orchid in new potting. Make sure to water the orchids in moderation, use spray bottles to prevent the leaves from getting dry. Repotting is another remedy for treating sick orchid. The best time to repot them is when they are inactive growth. Orchids most often active in growth after blooming when new leaves start to sprout and new roots begin to form.

When you notice that your Orchids is sick, do not give up on them. As long as you place them in a healthy environment with good lighting and humidity, they will surely recover. Note that Orchids are resilient, they can withstand and recover quickly from difficult conditions.