Why Send 99 Rose Bouquet and the Real 99 Roses Meaning 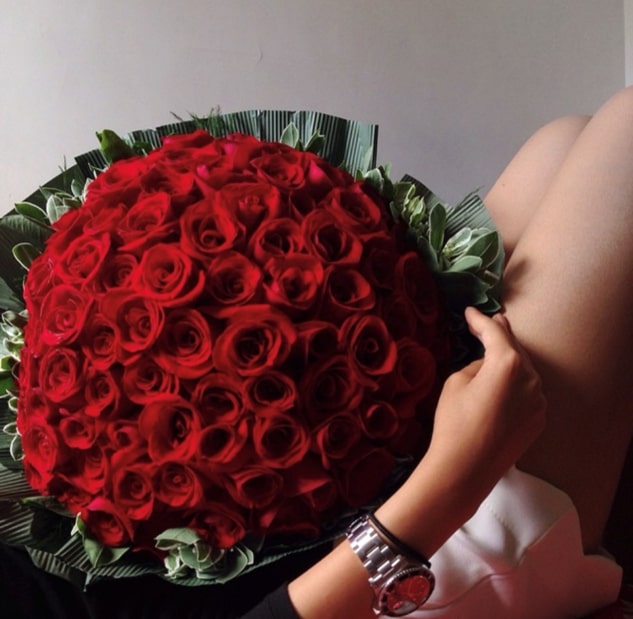 “The rose speaks of love silently, in a language only known to the heart.”

Indeed, a rose given is love expressed. Apart from any other flower, a rose signifies affection and appreciation, even more with its many colors, shapes, and sizes. During Valentine’s Day, it sells the best and is more preferred by romantics and hopefuls alike. Some people give a single rose, some a dozen, but very few, almost a hundred. Little did most of them know that the number of roses in a bouquet has a hidden meaning and gives off a special enclosed message to the recipient.

One may be enough. Three? Probably means “I love you”. A dozen? Maybe it’s enough. But 99 roses? That would definitely fill the recipient with love to her heart’s content. It is very rare to see a bouquet with this much roses. Usually, bouquets with roses are being filled in with other flowers and fillers to complete the look. But with a 99-rose bouquet, the main centerpiece is the rose itself. Why would somebody spend so much on a bouquet? Does this extravagance mean something?

Of course it does! It has been known that once somebody gives a 99-rose bouquet to a person, he/she expresses a love that will last a lifetime. In Chinese belief, the number “9” means longevity and eternality. It was even associated with the Chinese emperor back in old times. The number “9” is used most of the times when addressing anything related to the Emperor. It is even believed that the Emperor’s robe has nine dragons embroidered on it and that the dragon has nine children. The mere pronunciation of this number in Chinese sounds like the phrase “long lasting”!

As a matter of fact, there are 9,999 rooms within the Forbidden City that can be found in Beijing, China. Even its mere gates are decorated with 9 spikes both horizontally and vertically which add up as “81”. This is not the only Chinese architectural structure inspired by this lucky number. The Imperial Palace has high walls measuring nine Zhang and nine Chi. This goes the same with the Paiyun Hall of the Summer Palace and the Zhengyang Gate. The top level of the Temple of Heaven also has the same measurements.

During the Qing dynasty, the emperor at the time was given eight white horses and one white camel by the Mongolian rajahs as their present – which all add up to nine. Even at the present time, people who want to study China and its history are being taught that the number nine is sacred number as it represents and symbolizes all the Chinese emperors.

Having believed that the number “9” is very lucky in Chinese tradition and history, using this number and doubling it as rose count to your bouquet means “long lasting love” – an appreciation to someone’s existence and a promise that through thick and thin, the love between two lovers will stand the test of time. It serves as an affirmation of someone’s deep affection and love being represented by roses. Usually, red roses are being given in occasions like Valentine’s Day and it obviously means “love”. However, there are also other colors of roses that one may choose to make this 99-rose bouquet unique and meaningful.

White roses signify marriage and spirituality. Oftentimes, this is given to wives and when a friend or family member passes away. Yellow roses mean friendship. Pink roses signify grace and elegance and the appreciation of someone’s life. Blue roses are often given by secret admirers as it could mean mystery and intrigue. Rainbow roses are often given to mean how somebody gives color to someone’s life and is also a popular choice for the pride community. There is still a lot of colors especially with modern planting techniques nowadays which give unique designs to roses through dyeing.

To make the bouquet look extravagant, some florists add a few accents and layers around or inside the bunch of roses. A good idea is to place white baby breath flowers around the bouquet to emphasize the roses. Some florists also apply modern techniques by using LED fairy lights that subtly lights up the whole bouquet to make it look more special even at night. This gives off the illusion of fireflies. If you want to play around with colors, you may also opt for different colors of roses to make up your special bouquet.  Some layer it around like a circle, some try to from shapes like heart, and a simpler way is to just put a dozen lighter colored roses in the middle and surround it with darker ones.

Prices of 99-rose bouquets vary depending on the location where it was bought, the quality of the roses and where they came from, and also the complexity of the arrangement. The average price of a 99-rose bouquet ranges from $250 to $300 and could go higher especially during special occasions like Valentine’s Day, Mother’s Day, and every June where most weddings and proposals are being held. Nevertheless, it’s really not about how much money was spent but the priceless reaction and happiness being given by this wonderful present. It may look extravagant but to the recipient, it really speaks of the giver’s love and appreciation and his/her eternal love that will forever stand the test of time.

No matter which color you choose, the arrangement you ask the florist to make, or even the price of this special gift, giving a 99-rose bouquet is definitely the way to go. Backed by the Chinese tradition, this special number does not only symbolize luck and fortune but is also an epitome of long lasting love and unconditional affection. If you want to express this, go ahead and buy it for the love of your life! As what Georgia OKeeffe said, “When you take a flower in your hand and really look at it, it really is your world for the moment.”